When Jacob was diagnosed …… by Conor Byrne 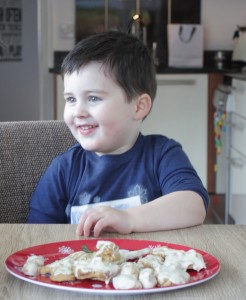 Getting your new born home safely is every parent’s goal, getting a call from a specialist to say you need to get into hospital immediately with him (but don’t worry) throws you into a tail spin. When we got into Temple Street all I wanted to know was what was wrong and how was it going to be fixed. I had never heard of PKU so just getting my head around that was tough.

I remember being in the hospital on the third day and someone said something about meat and I said “What, he will never be able to eat meat”. Somehow I had missed that this was for life and wasn’t going to change. Being taught how to take his bloods was scary, I was worried about getting it wrong. There was just so much to take in, it was pretty overwhelming. Everyone was very calming and telling us not to worry, it was all under control, but I didn’t feel in control at all and I knew Jacob’s life would be different, no matter what everyone was saying.

Getting Jacob home again became the most important thing, but I was so worried that we would do something wrong. The first weeks are pretty much a blur, we had moments of panic and worry, and nights were more sleepless than they probably should have been. We always had the metabolic unit to call; this was great during the day time, a little harder at night time. I know that things could be a lot worse for Jacob, so much worse, but you never imagine your child being born with a condition that needs to be managed for his entire life. As the journey went on it became clearer that Temple Street had the most amazing support structure in place. Everyone was mad about Jacob when he came in and then as our visits went on and got spread out even more they were just amazed to see his progress. As was I. As with any baby you go through stages but within each of those stages for a PKU baby there were little mini sub stages and new things to get used to and new challenges to face. You get through these though and find your rhythm and life sort of goes on like normal.

There are tough days, like when he wants a second Weetabix and you have to say no but for no other reason than he has no more exchanges left. Trying to go anywhere is tough; you have to be really prepared. When the ice cream van called around to his cousins christening we had to pretend he was getting the same as the other kids! Or he refuses to eat and you need to get exchanges in or have maxed out on exchanges. Or people tell you it’s like weight watchers! Those days are hard and it hits you that he did nothing and yet he has to deal with this.

He is too young to understand at the moment, so in lots of ways that makes it easier. The dieticians also told us that he would develop his taste buds to the food he is on and that is true, he loves his pro zero milk, first spoon, bread, pasta – which is great. As a family I like us to try all eat similar food, so if we are having mince and pasta, Jacob will have his version, its more work but it means he is at least not feeling left out. So it’s possible to give him his own version our food. I would still love to know what makes his levels go up and down the way they do. There doesn’t seem to be rhyme or reason to it and that does my head in! But it is what it is and at least we have the team at Temple Street to talk to.

There are lots of other supports too. I wasn’t into them all to begin with, but as time goes on you realise that these things really help. So cookery demos, PKU days out and weekends away, the PKU association and Facebook group – all these things just help you out, mostly with ideas for food!! Jacob’s life is different, there are no two ways about it and I wish that for the rest of his life he didn’t have to deal with this, but he does and all we can do is help him through it as best we can, deal with the good days and bad days as they come.

The one thing everyone says to us, who knows about his condition, is how you wouldn’t know there is anything wrong with him. He is into Spiderman and McQueen cars like any 2 ½ year old should be, he runs around like a lunatic and makes me laugh every day. He is my little PKU super hero and I love him for it. I still wish he could join me for a steak someday though!

Meet the children who can’t eat a plate of chips

For most parents, the heel prick test is one of those forgettable, standard procedures that…